The Ballard Criterium is an awesome race and last year I had a super ride. This year it was my first DNF in ages. Rats!

That said, I was going fairly well up until I had to bail. Here I am looking studly well before I pulled the rip cord. 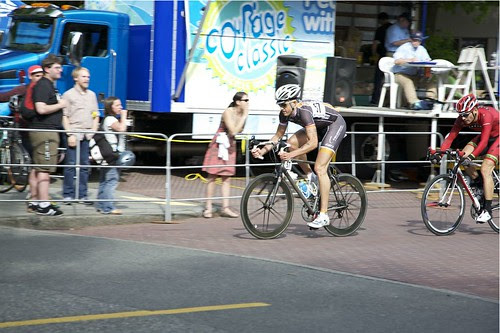 The afternoon started with much better weather than was forecast so that was nice. I connected with RC Rogers and Greg Kauper and we rode over to Ballard. I LOVE being able to ride to races… it seems so ironic that we have to drive to all these cycling events. Plus, riding there is the perfect warm-up. RC did his own thing while Greg and I joined Tom Wick, Aaron Lavin and another Garage Racing rider for a little spin around Ballard.

I got to the start 15 minutes before we were scheduled to go as positioning is crucial in criteriums. I just don't have the energy to haul myself all the way from the back of the pack to the front these days. I lined up right in front and right next to Doug Davis. That was another irony.

Right from they gun Doug takes off. I knew someone was going to go but Greg had insisted I NOT take a solo flyer or go from the gun so I hesitated. WRONG. Tom Wick went after him and Greg went after Tom. They were soon joined by Pete Baughman and we would never see that bunch again.

Since Greg was up the road I just tried to watch for counters and was able to go with moves by Keller Rohrback and a few other random riders. About 10 minutes in some guy went pretty hard and I went after him and suddenly we were away. Turns out this guy was from the Fred Meyer team and I also had Alex Rosenast along for company.

Perfect! Or so I thought. I figured Alex would not work too much but this other guys should and we were moving away from the field so I was getting confident we would catch the break. And with two Garage riders up the road I was SURE they would control the field. But after only two laps these other two guys pretty much stopped pulling. What to do? I waited one more lap and until one of them had just pulled and then out of turn four I launched and tried to go solo. I lasted about two more laps but could tell I was not on an A day and the gap basically did not change. The closest I ever got was about seven seconds and then the break started to pull away again. Damn.

So I sat up and got reeled in by the bunch. But I still felt okay so I stayed near the front.

With about seven or eight laps to go Greg suddenly went backwards. Crap. He told me to stick with Kenny Williams (good advice but hard to execute) so I figured it was time dial up the focus again and I moved up and found Kenny's wheel.

With five laps to go we were barreling down the back straight into turn three. The speed did not seem excessive but suddenly Jim Flynn who was right in front of me lost traction and hit the deck and started to slide across the road right in front of me.

His rear wheel touched my front wheel and after a super hairy wobble that made me unclip both my feet I found myself straddling the top tube and both of my cleats were surfing the cobbles. "Yes, I survived!" I thought and as I came to a stop I tried to clip back in.

When one rider plowed into the back of me knocking me down. And then another rider ran into us and fell on top of me. Shit.

That took some time to extricate myself from but luckily I was not hurt and it looked like no one else was either. AND My bike seemed okay too… whew. Since the pack was long gone I rolled around to the pits and waited to take my free lap. That's when the official came up to me and said, "No more free laps." Ouch.

With the pack at least a half lap up the road I had no chance of rejoining the race. So I did an about face and got off the road to watch the finish.

Turns out the break of three stayed away and Doug (the guy that I had lined up next to) got 2nd. Nice. I was pretty bummed at first but what can you do? In spite of not having any real crit fitness I stayed near the front, I followed attacks, I got in the second move and I at least gave it a solo shot. And I was still there with a few laps to go. That was some consolation.

Criteriums in general but this course especially seem about momentum and not losing any. It took me a few laps to figure out turn three but once I got that dialed I was doing a reasonable job of staying off the brakes as much as possible. It helped a lot.

Looking at my Garmin file below I think this is the highest I have had my heart rate all year! I think this happened when I was getting in that move where we stayed away for a few laps. Good to know this old man can still top 170 bpm. And 26 mph average? That's pretty cool.

As usual, congratulations to Garage for being everywhere. And to Greg for making in into the wining move. He said he worked just a little too hard right before Doug put in an acceleration and got popped - too bad for us.

For the most part this was a safe race but there were a couple of guys - one in particular - that were really chopping you in the corners. One of them even announced that he was going to do so before he did it! Whatever, announcing it does not make it any better. Everyone draws the safety line some place different and I guess I draw it over here and this guy draws it over there.

Notice how I did not mention any names? I'm learning? :)