Magic bracelets? Why sure, I'll buy that.

And according to the Associated Press, so have enough other people to generate 35 million in sales from just ONE BRAND. Whether it's Power Balance or iRenew, people are obviously completely desperate to find the magic bullet to cure all their ills.

Really, what is not to love about a magic bracelet that will harmonize your energies, restore your balance, and add inches to your penis? Okay, that last claim might not have been made but it's just as realistic as all the others so I'm throwing it in. Plus, it so should have been made. When I make my millions with Martin's magic bracelet it will add 2" (per bracelet! buy lots!). Guaranteed.

The power of placebo is obviously not something you want to underestimate.

I was listening to a story on NPR the other day (which was probably a follow-up to this one) where they said that not only do placebos work, they still work a significant amount of the time when people know it's a placebo. Apparently just the act of taking a pill will make some people feel better and cause them to have a physiological change brought on by psychological conviction. Nice.

I am a huge skeptic. HUGE. About anything/everything. Sometimes to the dismay of my wife and friends but I mean c'mon, how crazy – and sometimes incredibly vaguely documented – do these claims sound?

Whatever. How many ways are there to fake this? About a million. Here is one. 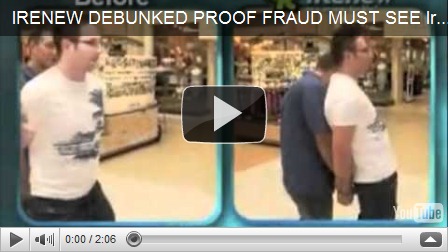 What...?! Call me closeted but I did not know that I needed to carry around a hologram much less that it would "resonate with and respond to the natural energy field of my body". But hey, if this infomercial/web site/random spokesperson says it's true then I better order one up stat. It also says here that if I'm one of the first 100 callers I will get an additional bracelet for free! All I need to pay is separate shipping and handling. While I'm at it, I better get a tinfoil hat to protect myself from the harmful Martian rays.

Here is what Mr. Kalama said, "I started using Power Balance after I saw my wife have the best sesh of her life with the stickers on her board." Interesting to note that for Ekolu's wife all that was needed was a Power Balance sticker, she did not even need the bracelet. Just think how much more powerful the actual hologram must be than a mere picture of the hologram...! It boggles the mind. That, or the blind faith people put in stuff like this.

It came as a pleasant surprise to me that based on the AP article Australian Competition and Consumer Commission got Power Balance to admit that there is no scientific evidence to substantiate any claims of improved anything. But will it stem the flow of cash to the Power Balance bank accounts? Hardly. When you get professional athletes endorsing these things and trainers for professional teams saying they, "swear by it" most nay sayers get trampled in the stampede. And don't forget the celebrity endorsements.

Remember the good old days when a bracelet actually donated money to something worthwhile or even just helped you feel good about an ethical cause? I do, and I even have a small collection myself: 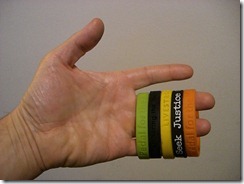 [Surprisingly, four out of these five actually did raise money for a cause...]

Of course this led to scores of wannabes who would adorn themselves with rubber bangles thus multiplying their outward show of support or goodness quotient. These four Livestrong bracelets on my wrist mean I'm four times as much of a supporter (read: gooderer) than you. Plus they absolve me of the guilt I felt when I did not buy a Real Change paper last night as I was leaving the grocery store. Kinda like diet soda cancels out French fries I think.

If you think these bracelets are junk science or a powerful placebo, you might also be interested in people who espouse truths like vaccinations causing autism. Some feel so compelled they start their own organization. At least one of them might be coming around. Still, some people will cling relentlessly to a belief even thought it has been debunked.

And don't get me started on toning shoes. 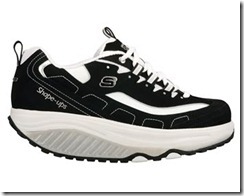 I guess the idea is that if your foot is less stable, your body will engage more muscles when you stand/walk thus giving your 'back' some 'boom'. What's that you say? These shoes don't work and are not living up the manufacturer's claims? And they might even be dangerous because you are more likely to roll your ankle or suffer some repetitive motion injury? Duh. Luckily America is the land of litigation and so you can take your ridiculous claim to some firm of ambulance chasers. How ludicrous is that? I mean, that's like suing someone who makes hot coffee for burning you because you spilled the coffee on yourself. And it was hot. People...

Anyway, pretty cool to be that guy who makes these kinds of claims. And when I say 'cool' I of course mean embarrassing.