In some situations it can seem like the blink of an eye and in others it's like an impossibly high mountain of time. I'm happy to say that today it was more like the former and less like the later.

I had what might have been my best mountain bike race to-date today and it netted me 2nd place at the Echo Valley 60 which is the second race in the NW Epic Series. In the end I finished just 14 seconds behind 1st place. 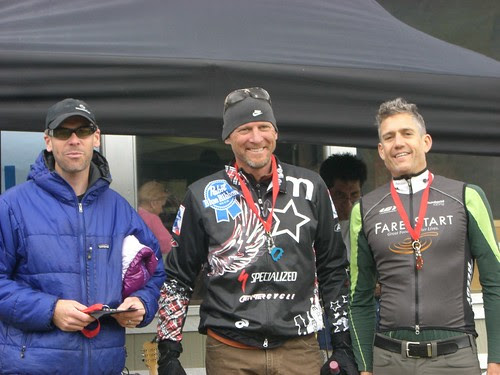 Last year Shelley and I opted to camp. I am SO glad we did not do that again this year as it rained Friday day and night. HARD. This time I had the foresight to book a cabin up at Uncle Tim's well in advance and it was quite nice. Not only was the cabin very adequate, it was a dream sleeping right at the start of the race! With a 9:40 start I did not get out of bed until 7. I can't remember the last time I was able to do that for a morning race.

These events have been amazing in that they start right on time and today was no exception. I was dorking around oiling my chain or adjusting tire pressure or some such thing (there is not a lot of maintenance to do on a single speed bike) when I suddenly realized I better change my clothes and hit the pre-race meeting pronto. By the time I rolled up Roger Michel was half done and I just barely heard that this year the finish was at the bottom and we would be directed which way to go at the turn off. Whew! That was some pretty important information for sure.

I looked around and saw all the usual single speed folks. There was Peter Stocker, Ben Spencer, Doug Graver and Gary Ballas. Sheesh. Then we're already at the countdown… 3, 2, 1.

And for once no one was busting ass up the hill! What a relief. Last year they started the single speed riders with the open men (read: young/fast guys on geared bikes) and it was a hellish pace right from the gun. This time I had the chance to warm up and ride into the effort.

There was this kid with an Idaho cycling jersey on and shortly after we started climbing he started to push the pace just a little. I found myself on his wheel and figured that although this was a tad fast it did not feel too uncomfortable and so I kept it up. I kept thinking back to last year at this race when I 1) had serious trouble on the descents and 2) was kind of blowing up towards the end of the race so priority one today was keeping up on the hydration and nutrition. After the Stottlemeyer race I knew my bike handling had improved but it was still not up to the standards of guys like Doug and Gary by a long shot.

I did not look back until maybe 1.5 miles later and lo and behold the two of us were off the front… After checking in one more time the pace did not feel insane so I just kept on going.

This kid was chatting EVERYONE up. We would pass some recreational rider and he'd be all like, "How's it going bro?" or, "Good job!" He also would say stuff to me like, "What gear are you riding?" and "I recognize your bike…" Sometimes you can just tell whether or not someone is going to last and today I knew this kid would not. As we hit the trail the two of us were still off the front by a little bit but within a couple of miles we were caught by first one rider and then at the end of lap one Doug showed up as well.

I was getting dropped big time on the descents and the flats… With the exception of Doug it looked like everyone was riding a bigger gear than I was. Every time we got to a climb I would claw my way back to this lead group. At this point I was not predicting a good result for myself.

ASIDE - of course no one stopped at the aid station after one lap so neither did I. Rats. No crisis yet but I knew I was only going to be able to last one more lap with no support.

On the first hill after lap one the kid disappeared.

At some point during lap two the other guy we were riding with also vanished. I was told after the race that he got a stick stuck in his wheel and it took a few minutes to fix that mechanical. And then he slowed down a bit as well.

Doug was letting me ride in front. Since I didn't think it really mattered who was leading this was fine with me. We went around a few riders and each time we passed people we both did it at pretty much the same time. As we approached the end of lap two where the aid station was Doug said, "I'm going to grab some water." Hell yes you are I thought as I was needing to stop too.

I handed my bottle to a volunteer and asked for some Nuun. While they filled it up I gulped some gel from one of the flasks I had in my jersey. And then Doug took off! Damn. Those last few seconds waiting for my bottle seemed to take years! When I rode away from the aid station I had a little surge of adrenaline but it was pretty short lived as you can only go so fast on a single speed. :) 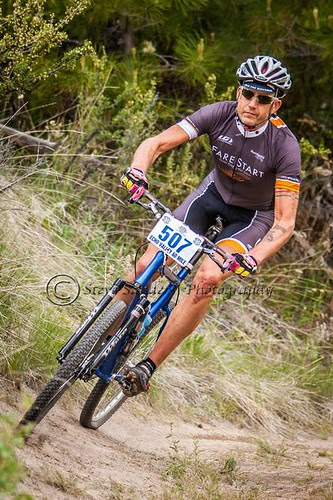 I seem to recall that it took me a few miles to catch him. When your cadence is almost exactly the same it takes a while to make up ground… By the time we got to the back loop I was right behind him and we started to climb where the traffic was going both directions on the same trail I felt like passing would be a good idea. We both passed a couple of riders and then after rounding the first left hand corner there was open tail in front of me so went by. Doug said, "Go get 'em tiger." to which I replied with some kind of unintelligible noise that was probably supposed to imply that I thought he would surely catch me in pretty short order.

I put as much time into him as I could by the top without digging myself a huge hole. It was enough that each time I looked back after the top of the hill Doug was out of sight.

By the time I pulled into the aid station for the last time with one lap to go Doug was not far behind and this time after getting my bottle filled when I rolled away he was still in the aid station. For a few seconds anyway. As I was leaving I heard him say something to the affect of him needing a food bar as he was not sure his stomach could tolerate a sandwich. I think this is when I started to count my chickens…

Oh man did I try to make hay. Knowing that my only real opportunity to put distance between Doug and I was on the climbs that's where I tried to push it. One chicken, two chickens… Ever since about 1.5 laps to go I had felt some cramping coming on but I not only got a new bottle at the last aid station I also drank two big cups of Nuun and it was starting to kick in and the twinge relented. Three chickens, four chickens… On the climb where I passed Doug on the previous lap I went as hard as I could and by the top he was out of sight once again. Five chickens, six chickens…

For sure I kept looking back and each time Doug was nowhere to be found. Seven chickens, eight chickens…

After you descend the section of trail where traffic is going both ways three volunteers were directing us to the new route which would take us down to the finish. I knew this would be single track but now I figured I was golden; Doug was still out of sight. Nine chickens...

And then I started down the trail.

Crap. This was slow going!

There were tons of tight turns and worse, there were loads of whoops and dips and many were in the apex of corners. I just KNEW I was slowing down too much for some of these dips but what could I do? I figured better to not crash and risk getting caught than to let fly and take a digger.

I managed to look back once on this descent and still did not see Doug. TEN CHICKENS!

And then there was Doug, right behind me. "Can I get by?" he said. Of course you can, what was I going to do? I pulled to the right and he rolled past.

I tried my best to keep up but it just was not happening. By the time we hit a short dirt road section he had about 100' on me. As we turned off the road and climbed a short hill I gave it everything but the hill was too short and Doug had been resting before we got there. The last bit of trail was downhill and then a really cool "S" turn on a grassy slope into the finish.

Congratulations Doug, you sure earned this one. And I'm pretty happy to have been able to make it such a close race. This would have been a cool event to have my heart rate monitor on for (not sure why I didn't wear it) and a cadence sensor (which I just ordered). Doug was using both and here is his Garmin file. At least our max speed is very similar. :)