Nothing is forever. Rats. 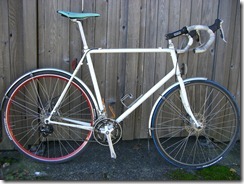 I got this bike some time around 1990? It was back when I was working at R+E Cycles and Bianchi decided to market what I think was the first production cross bike ever. And when I say 'cross' I of course mean 'using a bicycle as cross training' and not cyclocross.

Back in the day this bike came with cantilever brakes, a triple crank and (I think) bar end shifters. The slightly sloping top tube and tall head tube screamed, "Comfort!" and the gross vehicle weight screamed, "I will not go very fast!"

Well today when I was riding it finally gave up the ghost. Boo hoo.

This frame was (and is) cool as hell. Note original top-routed cables, can you say progressive? And the tire/fender clearance... One word: ample! We got an outrageous deal on this complete bike so I purchased one pronto. A co-worker liked it so much he got two! And boy has it done right by me.

I have ridden this Bianchi more than any other bike that I own. And not just because I have had it longer than all the others, but because it's so damn utilitarian. Here in Seattle most people who get bitten by the cycling bug will eventually acquire a dedicated rain bike that has fenders attached all year round. This was that bike. It was also my cyclocross bike for a brief stint. When I used to work in Bellevue I would commute on it pretty much every day. The few brevets that I have ridden were ridden on this bike. And some of my fondest memories of this bike are from right after I got divorced and all that mattered was cycling but I was not racing – I rode the crap out this thing.

I have had tires that range from 23c – 35c on this bike. At various times it's had a front rack, rear rack, lights, handlebar bag, you name it. It has always been the bastard that got component hand-me-downs from my race bikes. When it died it was fitted with 9-speed Ultegra STI levers (my last 9-speed bike), some carbon fiber handlebars (just to keep me feeling sporty) and I had just installed a new drivetrain and tires and overhauled the hubs. Fancy.

I used to brag to everyone that would listen about how heavy this thing was. "Oh man, it's at least 30 lbs if it's an ounce..." is what I would always say. But I never got around to weighing it. Since this was my last chance to do so before it gets parted out I had to finally get some numbers. 27 lb. I should learn to shut my mouth.

In my continuous efforts to put better and better (meaning stuff that was made in the last decade) parts on it I had to resort to the threaded-to-threadless fork plug so I could bolt on a standard stem. Hey, it worked just fine.

Over the years it has evolved.

One of the first things I did was have some extra braze-ons added for a front rack. Then I added a third water bottle underneath the down tube. Then I added disc brakes and a few housing stops to clean up the cable routing. The last change was when I had it repainted a few years ago and decided to finally cut off the cantilever mounts. Clean baby!

But it came with the pump peg on the back of the head tube. Nice.

Will I fix the fork? I think not. First of all I don't think there is any way to fix the fork; I would have to get a new one. Also, it's got a 1" steerer and I see no reason to cling to the past. Besides, where would I get a 1" road fork with a steerer this long and disk brake mounts? Exactly.

So many memories. And funny how I associate so much value with something that really is a piece of junk when you compare it to all the uber fancy bikes out there these days. But obviously my definition of fancy is too narrow, light is not – by any stretch of the imagination – the only way to grade a ride. This bike is comfortable, has gotten my up the steep side of Cougar Mountain and keeps me company all winter long. That has to be worth something.

Here you can see the STI levers with no plastic caps because I fell a few weeks ago. Seems like the more you and your bike go through together the more attached you (read: I) get. 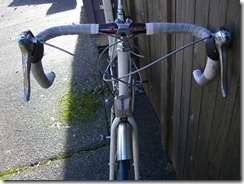 Back then I thought this cable routing along the top tube and down the seat stay was the shit. Now I know the housing just fills up with water. Wasn't the original idea to keep the cable OUT of the elements? 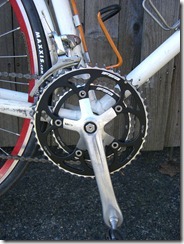 Dave Levy did most of the modifications to this bike. Note the sweet brace to deal with the extra stress of the disc brakes. Too bad my fork couldn't benefit from this. 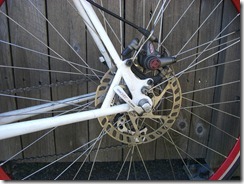 It broke right at the edge of the disc brake mount. 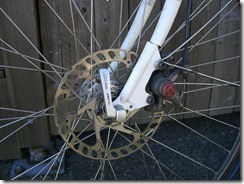 Email ThisBlogThis!Share to TwitterShare to FacebookShare to Pinterest
Labels: bicycles