Had a great run but it killed me. What a bummer!

My day did start off with a classic sight that spells spring in Seattle. as I rode past Drumheller Fountain there were a bunch of half grown ducklings on the duck ramp. Awesome. 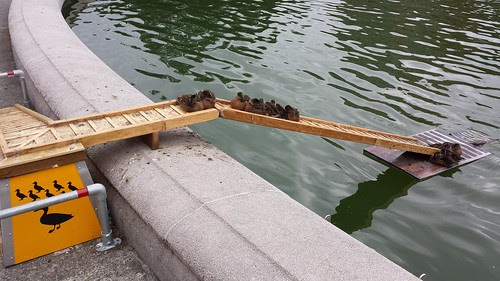 In the morning I did some light cardio to warm up my legs and then followed it up with a solid 20 minutes of stretching. As expected, it felt much needed.

At the Fleet Feet Sports Seattle Tuesday night run I was hoping to finally go faster. And I did. I was pretty rested and so started slightly quicker than I usually do and soon found myself jogging along with the lead pack. For the first time ever - not that it means anything but it made me feel food - I stayed with the lead pack all the way through the Arboretum and to the bottom of the dirt climb. Then it was see you later as they ran away from me.

At least I was able to run the entire climb but I was obviously a bit winded as my close was not as strong as I would have liked; I just maintained the pace instead of accelerating. Still, solid effort.

As I finished the run I noticed that my right calf was killing me. It felt torn? I could not tell as I have 1) never injured my calf like this before and 2) have never torn a muscle. It just kept getting worse as the evening progressed.