In this case a picture does tell the story. 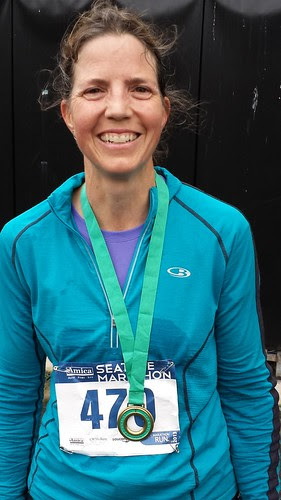 This is my second year pacing Lucca at the Seattle Marathon and so far so good. Last year she got a marathon PR. I ran the whole thing with her and her friend Robert met us at mile 22. This year I had to settle for meeting her at mile 8 and 17 and running just the last four and Robert met her at mile 20. It appears to be a winning combination as she again got a PR (by almost three minutes) and this time was fast enough to qualify for Boston which was her goal heading into this race. She needed to run sub 3:55 and had over two minutes to spare.

Nice job Lucca. I was super grateful to be part of this effort and am very proud of you.

The night before Lucca and I configured the 'virtual training partner' on her Garmin Forerunner 405 so that she would always know if she was ahead or behind her target pace which was 3:55.

Our house is right on the course so after dropping Lucca off at the start I headed back home and gathered her fuel (GU and Nuun) and walked down to mile 8 which is just after you get off of the I-90 bridge and waited there. I love watching people run and this is also where the Partybot parked himself this year so I got my groove on while spectating.

One of the people I saw while waiting was Phil Kochik who appeared to be pacing a friend. When Lucca showed up she looked great! I jogged with her for a bit to chat and she had a gel and some sips off the bottle, took another gel for her pocket and then it was goodbye again. Since I had over one hour before I saw her again I walked back up to our house to chill.

Mile 17.5 is the same place as mile 8 so I just walked back down to Lakeside Ave S and waited for Lucca. One fun thing about watching runners on an out-and-back route is you recognize folks. And incredibly some runners recognized me! While waiting I also saw the very last marathon walker heading south. Man, that has got to be a long day.

When Lucca showed up we jogged a bit again and she again took two gels (one for her pocket), a few sips off the bottle and she also asked for a couple of Ibuprofen. She said she didn't feel achy, it was just to stay that way. :)

After we parted I had to bust ass back to our house, grab Shelley (who was going way above and beyond supporting all this running stuff) and we headed over to my Dad's house which is just a couple of blocks away from mile 22 on Interlaken. I stripped down to my running clothes and when Lucca and Robert showed up we all took off together after she managed to squeeze in a hug with Dad.

And right away it did not feel very good. Then again, it didn't hurt so I carried on. I had talked to Shelley and was carrying my phone so worst case I could stop, walk somewhere and give her a call for a pick up after Lucca finished. I was also carrying a jacket and hat for warmth in case I had to pull the plug.

Robert was awesome! Not only is he great company and super positive, he's also Mr. Math. He had all the splits and finishing times and paces memorized and took pictures while we ran. Nice. Between the two of us we kept Lucca very well hydrated and she took one more gel from me. As you exit Interlaken there is the last aid station and they had Krispy Kreme doughnuts. Really? Maybe if you're done running...

The tiny decline as you exit Interlaken did not feel very good at all on my knee but I was not experiencing the super sharp pain that I knew would force me to stop. There was one mile in Interlaken where Lucca's pace dropped to something like 9:40 but she quickly recovered and mostly she was running sub 8:50. One thing about Lucca is I can never really tell when she is hurting as her expression hardly changes. She pretty much looks good all the time.

As we crossed I-5 the wind hit and boy was it stronger than I anticipated. It was also a head wind for most of the last two miles which isn't great so I tried as much as possible to run in front of Lucca but with runner traffic it was not super easy. But both Robert and I were hip to shortening the course by running the inside line on corners so we directed Lucca along the quickest route.

In the final two miles she took a few more sips from the Nuun bottle. As we got to the last descent heading down toward Mercer I tried to 1) not ruin my knee and 2) to encourage Lucca not to use the brakes too much. As we hit Mercer and the last incline I finally saw some effort on her face and suddenly she turns to me and says, "I think I'm going to puke." What...?! No way. To her credit she kept it steady and as soon as the road flattened out she recovered and even picked up the pace as we entered Memorial Stadium.

Man, what a vicarious rush! Not only did she achieve her goal but she had over two minutes to spare!

This day could have gone south in so many ways and everything came together. The forecasted rain never materialized, the cold front held off, the sun came out, Lucca had a great day and managed to put some time in the bank without blowing up and my knee survived. I had a little hitch in my step after I stopped running but nothing serious and I think I'll survive/I did not push myself too far.

In other news, Uli Steidl (fellow Seattle Running Club member by the way) won the Seattle Marathon for the TENTH TIME. Talk about an institution.

Here is my run.